Meet Jason Stamp, a police officer in Barrie, Ontario, Canada who is a thug that enjoys beating young people half his size because he has serious ego problems. Another fine example of Barrie Police brutality.

One such incident happened February 4 2021 on Dunlop Street in Barrie, Ontario, Canada.

According to witnesses, a skateboarder was caught going through a red light, and was issued a ticket. He put the ticket in his pocket, and went on his way while being mouthy at the cop. Jason should have ignored him at that point and this should have ended there. But no instead the pig proceeded to chase him with his cruiser, then cut him off and slammed the brakes causing the skateboarder to crash in the car. PC Jason Stamp then got out of the car and proceeded to go beat him up. Kneeling on him, hitting him on the head, violently flipping and slamming him on the asphalt road, smashing his head into the concrete are things that can be seen in the videos. Very brutal and uncalled for.

UPDATE [Apr 29 2021]: Some somewhat good news. It looks like Constable Jason Stamp, 46, is scheduled for court on June 7. There is hope that something actually comes out of this. Better late than never.

Been several months and no news of the actual court date... did they simply drop charges and hope this blows over so he can just go back in the force after over half a year of PAID vacation? If someone has details, do mail it to me so I can update this. 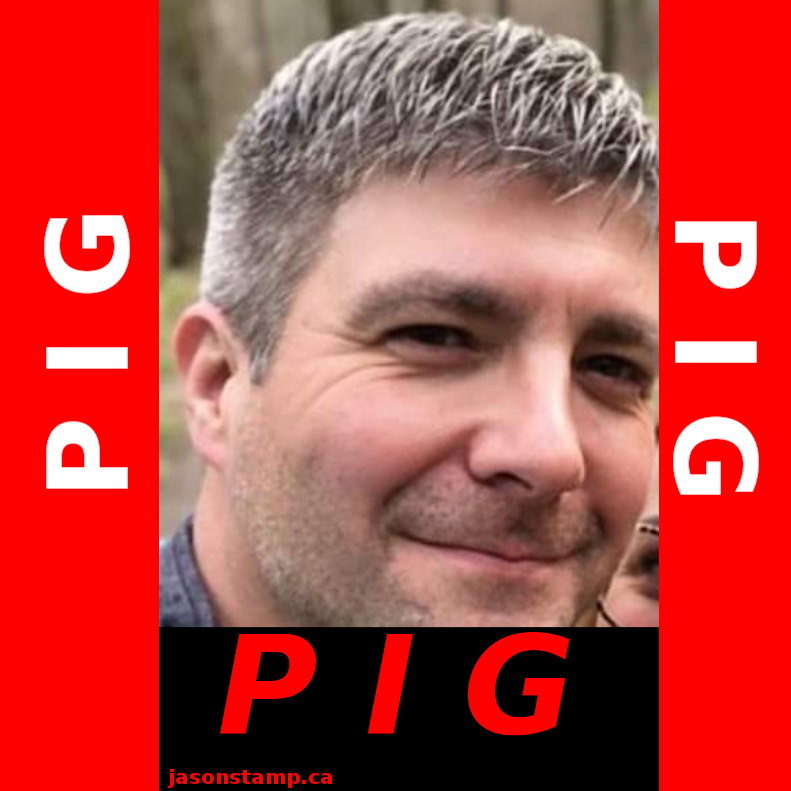 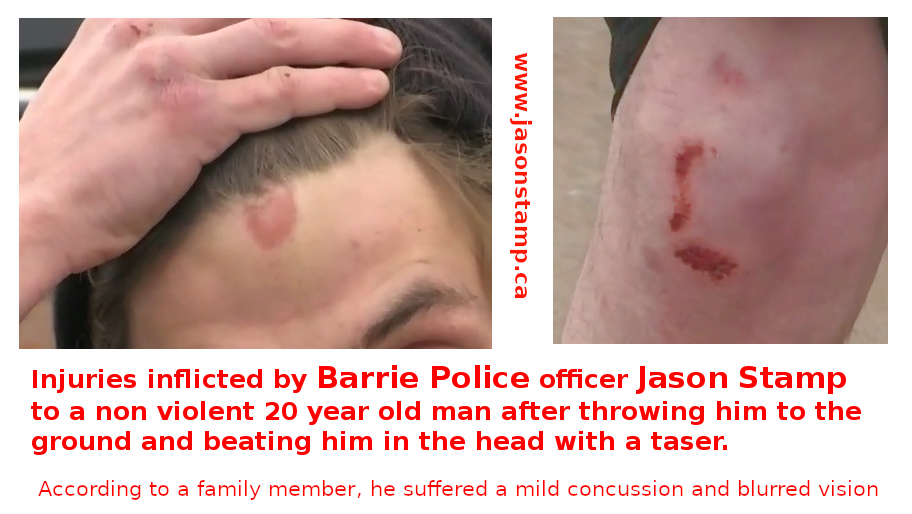 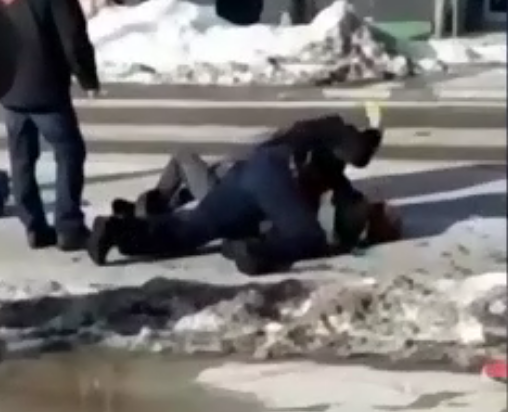 One of multiple hits inflicted by Jason Stamp 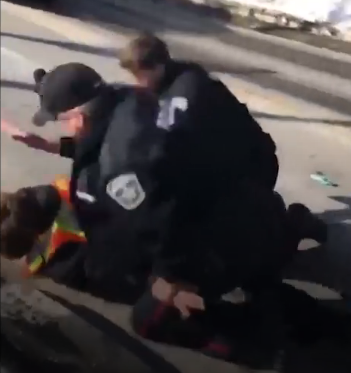 Another hit, after first smashing his head into the pavement 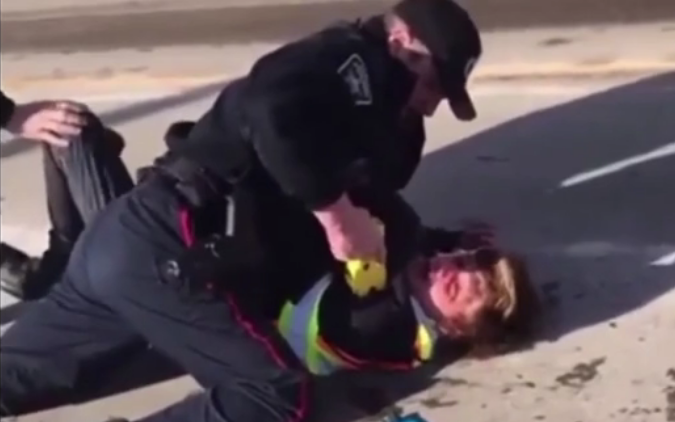 Jason Stamp threatening to "light him up" with taser


Also can we remind these pigs that it's a pandemic and they should be wearing masks? I think that's the least of our worries right now but thought I would add. If it was the other way around, the maskless person would end up being followed home and then shot. So if you are a civilian you better wear your mask but cops can get away without wearing one while they are yelling at everyone and spreading their germs. Got to like the double standard as usual!

Here are various links to news stories, videos etc about the Barrie Police Assault Incident on Dunlop Street by PC Jason Stamp Barrie Police brutally beating a young man. Please note that it is quite disturbing.

Meet Officer Jason Stamp of Barrie - This is probably the best summary really.

Barrie Police Twitter page - Feel free to reply to random tweets and tell them your feelings on this incident. They might block you though!

Video: Another angle of the assault

Barrie police as well as Barrie mayor Jeff Lehman won’t identify cop who beat skateboarder - We are pretty sure it is Jason Stamp but it is odd that they refuse to release this, see note at bottom of site

Brutality in Barrie. Skateboarding is not a crime. #defundthepolice

Protest Held In Downtown Barrie - In an interview, the victim's sister confirms he had mild concussion and blurred vision and they refused to give him medical help.

Results of OPP probe of violent Barrie arrest expected within six months - Right, wait 6 months in hope people forget, then it can be swept under the rug! Typical police brutality "investigation". He is still being paid! Even if by chance he gets fired, he will earn over 6 months of salary on top of pensions and other bonuses I'm sure. If it was any other job you'd get fired on the spot and not paid. It's time to abolish the police act and revamp the policing system, enough is enough.

OPP Seeking eyewitnesses to controversial barrie police arrest - this article also seems to confirm we have the right name of Jason Stamp.

Public Outrage After Barrie Police Attempt Murder Of Citizen – #FTP #FilmThePolice - Attempted murder is not that far fetched and this could have actually ended much worse. If you hit the head just "right" it does not take much to cause permanent damage or death

A violent cop, a cowardly mayor and the tragedy of policing in Canada


FilmThePolice.ca - This police brutality issue is pandemic and is out of control. See many other violent police videos here. 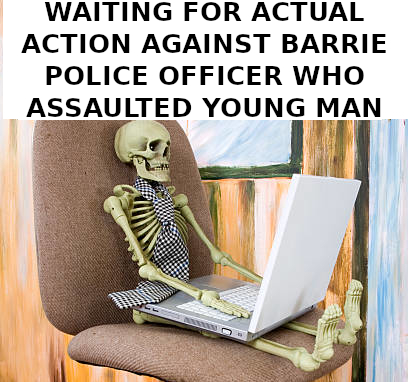 Please sign this petition and also this one to have Jason Stamp criminally charged like he deserves. It's time to start setting an example. Things need to change.

Oh and here's another one.

Please consider filing a complaint to the

This is probably more important than the petition and is a more official thing and may possibly hold some weight if enough people do it.

Imagine making six figures, $116,357.77/yr in 2019 to be exact, and getting to beat up helpless people half your size. A school bully's dream come true! Just become a cop. Cops may have to deal with the worst of humanity, but so do lot of other jobs such as retail but they can't be violent on people. Teachers for example are not even allowed to defend themselves if a student hits them! Meanwhile cops can use as much force as they want with no accountability. It's time for cops to be held accountable too.

He is also a freemason of Corinthian Lodge #96 in Barrie. So much for "making good men better". Maybe they should be made aware of his behaviour, I don't think they tolerate that kind of crap.

At this point this feels like satire, but it needs to be said, Police Constable Jason Stamp is actually involved in an anti bullying program with 8 schools as part of the Community Service Unit. How is that right when he himself is a bully?

This screenshot off the Barrie Police Department site was sent to me. I cannot seem to find it on their site myself, maybe they removed it to hide this fact? If I find out that Jason Stamp was in fact removed from this program I will correct this but until then, I urge you to contact each of those schools and let them know Jason Stamp should no longer be welcomed.

If Jason Stamp will bully a 20 year old who is still practically a kid, what's to say he won't bully young school kids too? Teenagers can be mouthy, and he can't handle that and will probably beat them up. 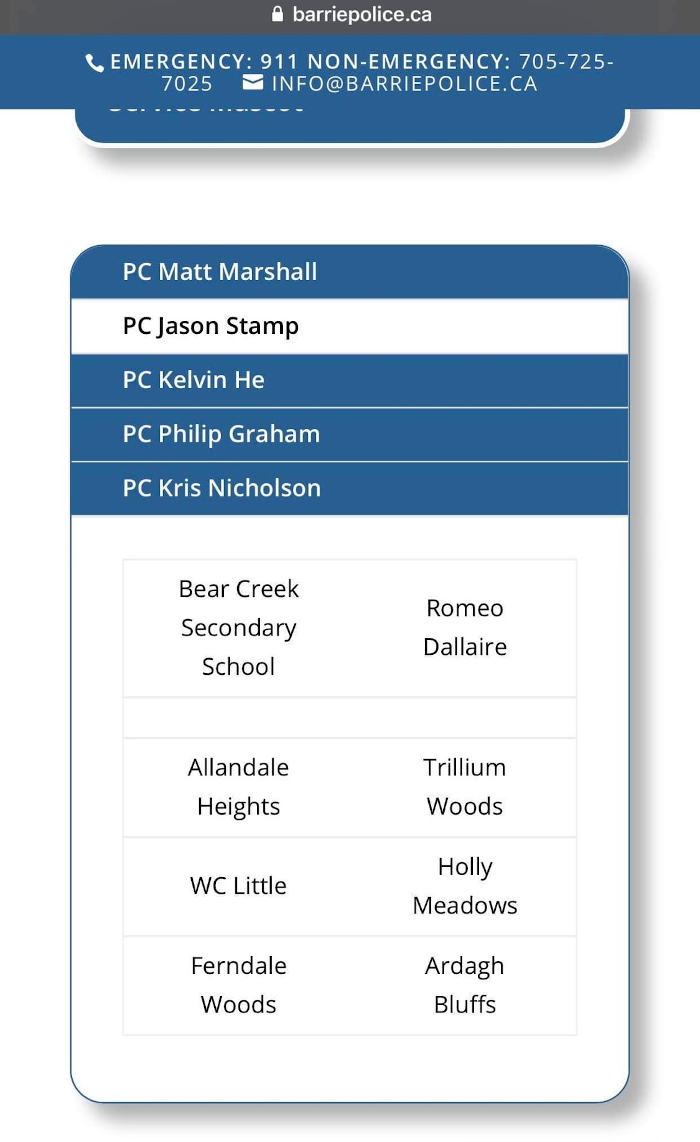 
Alternativly you may contact the school board itself, which covers each one of these schools except for Romeo Dallaire.


Looks like Barrie Police can't take the heat and are blocking people on Twitter now! Maybe actually address this issue instead of trying to sweep it under the rug? 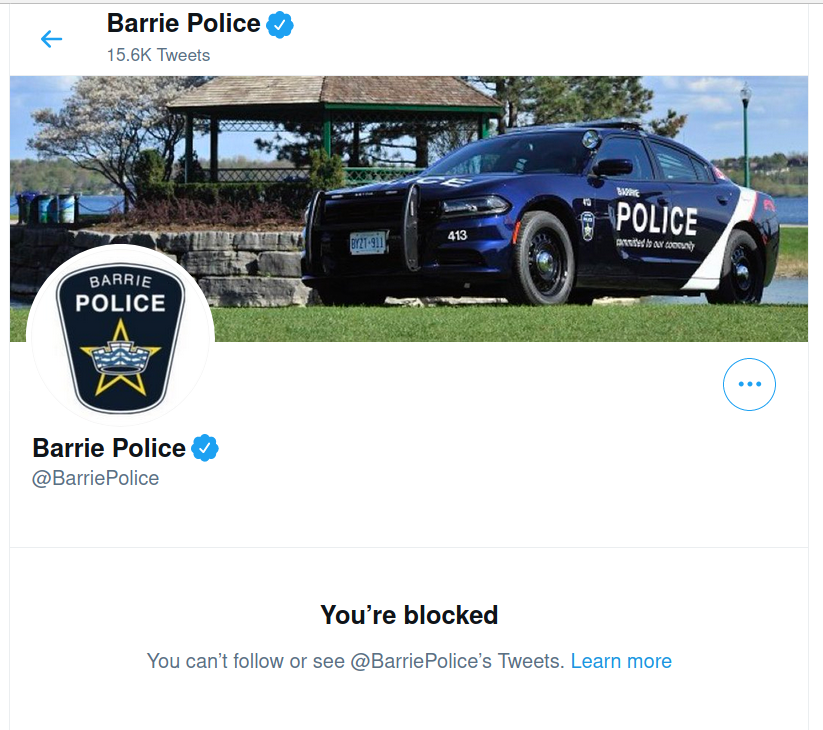 Pop quiz: How many police does it take to arrest a non violent 20 year old? 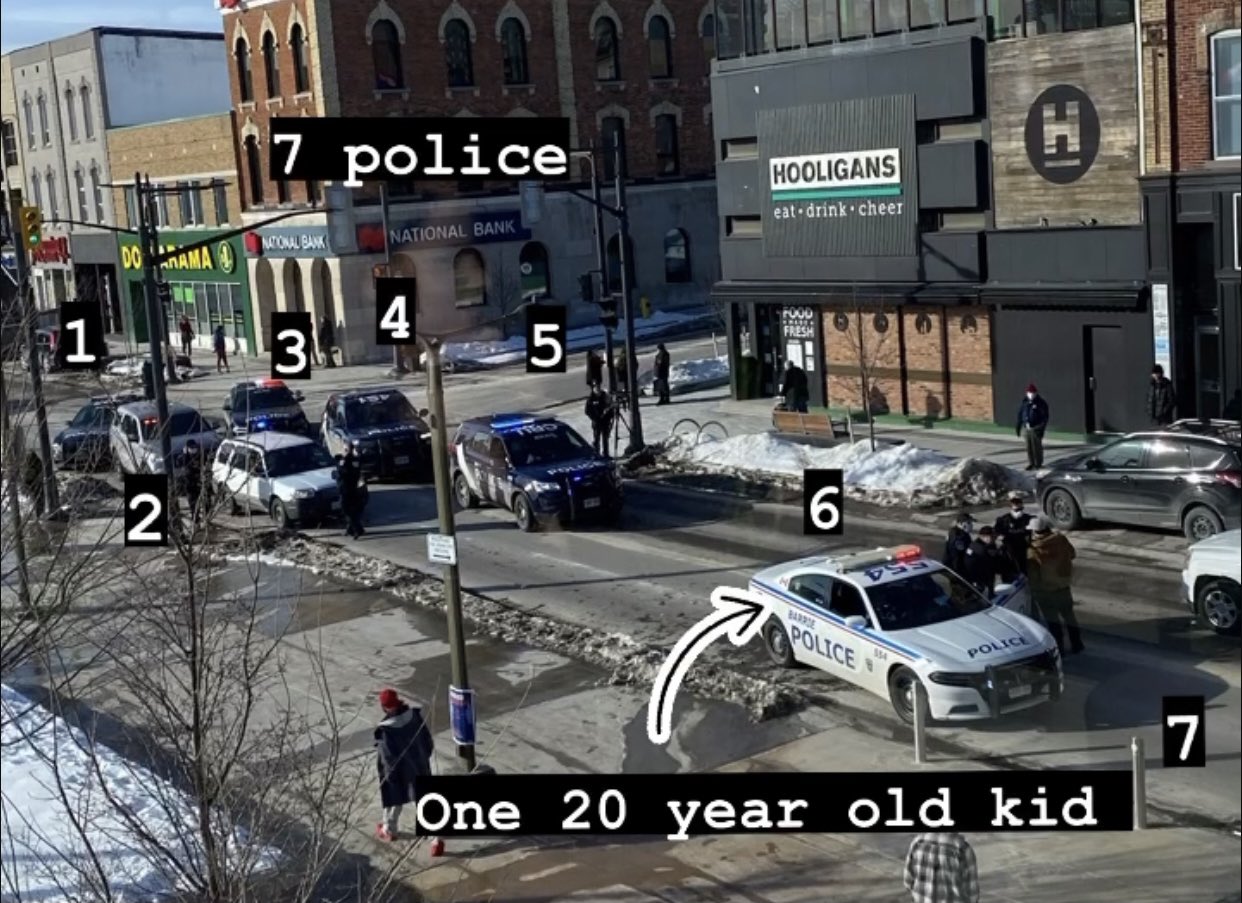 Seven. The answer is seven. These pigs are getting paid six figures for this! Your tax dollars at work! There's a Tim Horton's around the corner from there at least they did not have far to drive to get here.

I've just been throwing this together with links I find over time. If you want to add something email it to info@jasonstamp.ca.

This page has no ads, trackers, or anything of that nature. I am not trying to make money, I just want to raise awareness of how much of an asshole Jason Stamp is. It's the least I can do as a civilian concerned about this pandemic of police brutality. All information on this site is from various sources and we do not guarantee the accuracy of it. The videos alone should speak for themselves though.